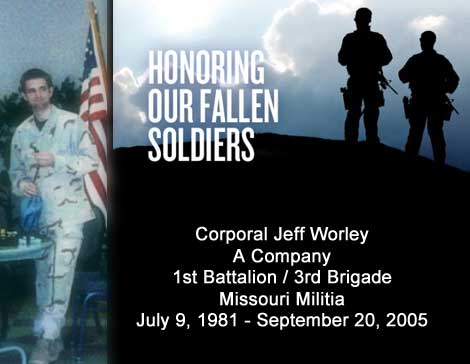 Jeff joined the militia out of a sense of duty to help his country and was an active volunteer for nearly 2 years. He served a tour of duty with the U.S. Air Force rising to the rank of Airman 1st Class. He was attending college and planned on taking ROTC to become an Army Officer. He was a dedicated patriot, always willing to learn, and when put in command, unassuming but a leader.

In the spring of 2004 he spent a week in Arizona working with volunteers of The Minuteman Project. He was present at training sessions even when he had as little as three hours of sleep, he did not complain and as always had his can do attitude with him. He was killed in a motorcycle accident on his way home from work. He is survived by his wife of one year, Wendy.

"As his commander I can say honestly that he will be missed by all of us. Good Patriots such as Jeff are hard to come by, as he was willing to walk the walk." -