Interested? Learn more about the organization, come to a training session, become a member.

The Missouri Militia is a volunteer organization formed to train and act as a reserve component to the Missouri National Guard.

The intent of the Missouri Militia is to act as a supplemental State Defense Force (SDF) for the state of Missouri. The militia is classified as a civilian volunteer organization and therefore will carry out operations in absence of orders as dictated by necessity during a crisis. All Missouri Militia personnel will conduct themselves with professionalism, integrity and the utmost respect for others at all times. 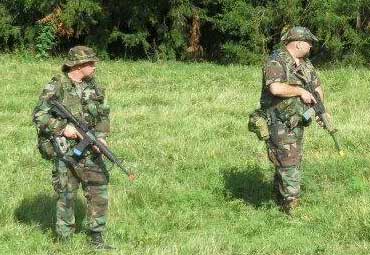 Today's militia has a wide spectrum of missions, from disaster relief to terrorism prevention. The slogan echoed now is "State Defense and Community Service." One role of the militia is defense of the state from terrorism or invasion. Other roles include disaster relief, search and rescue, emergency preparedness education and serving the community.

We can serve our communities through aid programs like Harvesters, Habitat for Humanity, Project Warmth, Blood Drives as well as raising money for charities  benefitting military veterans, cancer research, or volunteering at local food pantries and shelters. Given that the militia is primarily defensive in nature, it is natural that much of its resources should be aimed at bettering the communities from which it is derived.

Our military is deployed around the world, and here at home the threat of foreign and domestic terrorist acts is demonstrably real, as we have learned with events like the Oklahoma City bombing and the World Trade Center attacks. Modern life has created a situation where deadly chemicals and hazardous materials are manufactured, stored, and transported in our cities and towns and throughout the countryside, which present threats weather intentionally or accidentally unleashed on the public.

In addition to man made threats, increasingly volatile weather patterns and the natural world itself confront us with disaster on a regular basis: the Joplin tornado is a recent example, and with the possibility of a major seismic event on the New Madrid fault looming always in the background, a strong case to be prepared for large scale disasters is not hard to make. Our people are more vulnerable than ever before.

Interested?  Learn more about what's involved becoming a member of the Missouri Militia.

We understand. The militia is unlike anything you've probably ever experienced. It requires you to ask more of yourself, to learn new skills, and to take the path less traveled. It requires courage, integrity, and strength of character. In the militia you will be charged with defending your fellow man, helping those in need, facing disaster when it is much easier to do nothing.

Every citizen should be a soldier. This was the case with the Greeks and Romans, and must be that of every free state. Thomas Jefferson, Third President of the United States (1801–1809)